Continued concerns about rising Covid-19 infections and the prospect for more local lockdowns in Greater Manchester have contributed to a further dampening of demand, according to the fifth GM COVID-19 Recovery Tracker survey conducted by Greater Manchester Chamber of Commerce. The last three Recovery Tracker surveys covering August and the first half of September reveal that customer demand has decreased and caused a worsening in cash positions for many businesses.

The latest survey results show that current sales and advance orders from both domestic and overseas customers have weakened. Seasonal fluctuations during the main holiday period often tend to have an effect but the recent worsening indicates a loss of business confidence lasting beyond the holiday season. The time of year and restrictions imposed in parts of Greater Manchester appear to have had an impact on economic activity.

Subrahmaniam Krishnan-Harihara, Head of Research at Greater Manchester Chamber of Commerce, said: “The Chamber's COVID-19 tracker surveys shows the recovery trajectory for Greater Manchester's economy weakening after an early rise in June as lockdown measures were being relaxed. While business activity levels have picked up compared to the lows in April/May, our data shows that the recovery is more muted and not sufficient to lift the UK out of recession for some more time. The balances relating to customer demand and cash flow are still negative. Not only does this mean that more businesses reported a reduction rather than an improvement, but it also shows the short-term stabilisation in business activity levelling off. Since July, the balances have been hovering in the -15 to -20 range. However, the balances relating to advance orders have now reduced to -26.

“There was some good response to the ‘Eat Out to Help Out’ scheme in August but footfall in city and town centres across Greater Manchester has slightly reduced since then. Clearly, anxiety around rising infections has dented consumer confidence. There also appears to be an emerging shift in employment patterns. While many large retail chains have already announced store closures and job cuts, there is investment and expansion in e-commerce online shopping. This has implications for the high street and the people who work in there.”

Data from the latest Recovery Tracker also reveals shifting patterns on employment – by the end of September, nearly 70% of businesses will have brought at least some staff off furlough. Those businesses which have already brought staff off furlough have reported that half or more of their furloughed staff have returned to work.

Subrahmaniam added: “We have revised the economic outlook to reflect the latest survey results. After the increase in business activity as lockdown was being relaxed in June, there has been a subsequent plateauing. Current balances are much lower than initially expected and indicate a more drawn out recovery. The best-case scenario is a quick pick up in demand, which could translate to real growth in November-December, as opposed to October in the earlier model.

“The more likely scenario is of a temporary levelling off in demand, and a much slower recovery. There is a lot of anxiety that the recent increase in infections may require more restrictions to be imposed. The focus is now on two things: one, the end of the furlough scheme on 31st October and what that means for employment. Unless business activity levels pick up sufficiently to support employment, there is the prospect of further job losses. Secondly, we want the Chancellor to offer more support for businesses that are adversely impacted by a local lockdown. The payment of £1,000 or £1,500 for three weeks of lockdown disruption will not help alleviate the harsh conditions that many small businesses find themselves in. Without a further improvement in business activity, there is the risk of a prolonged period of economic stagnation. That can only be avoided with additional support and we call on Government to not put the nascent recovery at peril.” 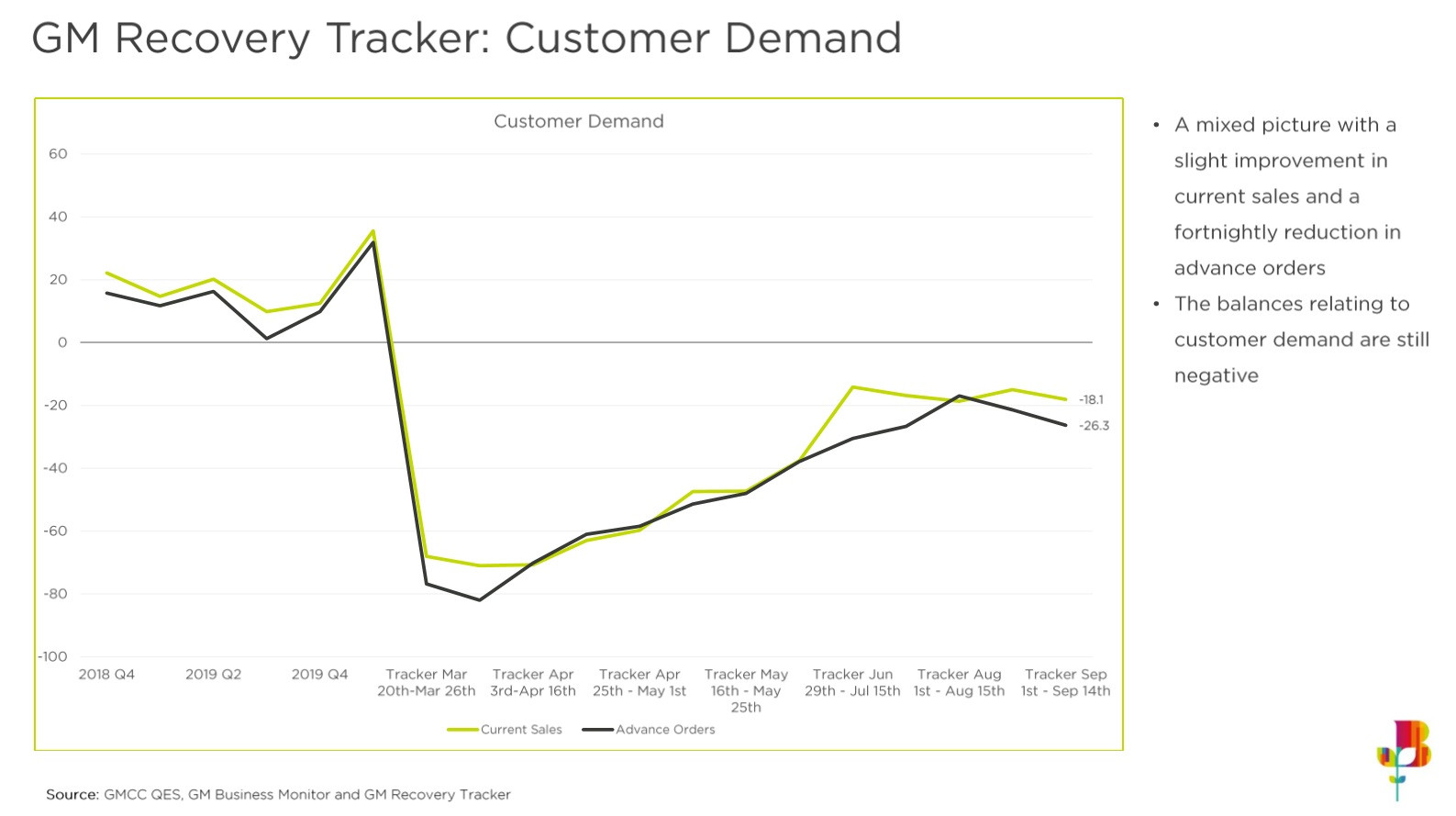 About Greater Manchester Chamber of Commerce

Greater Manchester Chamber of Commerce is the largest Chamber of Commerce in the UK, providing business support to approximately 4,500 members who collectively employ 446,000 people, around one-third of Greater Manchester’s workforce. Recognised as a leader in its field, Greater Manchester Chamber’s reputation in government circles has grown locally and nationally. At the heart of the area of greatest economic intensity outside London and the South East, the Chamber is the primary body for business support, policy, representation and networking. The Chamber is an independent, not-for-profit private company and its aim is to support businesses and help create the best climate for the region to prosper. This is achieved by ensuring that those taking decisions on key issues such as transport, taxation and business regulation hear the voice of our members. The representation of our members’ views is central to the work of the policy team at the Chamber; these views are gathered in a range of ways including our local councils, policy committees, sector councils, the main Chamber council, focus groups, meetings with politicians and consultations. The Chamber also offers a range of networking forums across Greater Manchester, free as part of membership, plus a variety of other events and services designed to benefit specific sectors or individuals and help businesses to grow.

Subscribe to news updates from Greater Manchester Chamber of Commerce