Hela Job, launched in London last month, is the UK’s first app that connects gig workers with local, temporary jobs. With Uber’s recent launch of a similar app in the U.S. Hela Job founders admit they’re in a race to win the hearts and minds of UK’s booming gig economy before Uber enters the market.

October 17th, 2019, London, UK – In the latest signs of an increasingly digital and competitive industry, Hela Job, the London-based company that launched the UK’s first job-finding app, now faces some stiff competition. Uber, the US-based ride-hailing company, just launched a beta version of a similar app in Chicago called “Uber Works”. Hela Job plans to own the mindshare of gig worker in the UK with their new app and Uber Works plans has similar ambitions in the U.S.

The London-based founders of Hela Job welcome the competition. “The gig economy is in desperate need of disruption in job markets throughout the world,” said Hela Job Founder and CEO Ioannis Antypas. “Uber’s entrance into the marketplace underscores the enormous opportunities in the gig economy market for different companies that know the local job market. Of course, we know the UK job market more than Uber. In fact, we carried out two years of R&D before our launch last month. We’ll prove our UK expertise as we reach out to gig workers in cities throughout the UK.”

A recent study by the Trades Union Congress (TUC) found that Britain’s booming gig economy more than doubled in size over the past three years and now accounts for 4.7 million workers. The study also concluded that one in 10 working-age adults now work on gig economy platforms, up from one in 20 in 2016.

How will Hela Job work? Once a business owner or HR manager posts a temporary job on the platform, local, pre-qualified workers are notified instantly on their smart phone. The first pre-qualified worker to respond to the job posting will be hired instantly. When a worker accepts a job offer, the app uses GPS to physically track them as they drive or, if they live in the same neighbourhood, walk from their home to the job site.

HR managers predict the app will save them time and money. “With Hela Job, I can hire someone temporarily and if they do a great job and I want to hire them full time later, I won’t have to pay a huge agency fee,” said Emma-Jane Nutbrown, Head of Business Development at a London Museum. “Another great feature is the fact that employees hired through the app are required to scan a QR code with their smartphones at the start and end of every shift. This makes time-sheets digital, more accurate, and saves us time in tracking their hours”. Also saving HR managers time – Hela Job interviews prospective workers before they can become eligible to be hired through platform. In addition, every job seeker is subjected to an AI-powered security check.

Job seekers call the app empowering. “The location feature is amazing! Who doesn’t want to work closer to home?” said Sia Tehrani, a London resident who works part-time at a London coffee shop. “I love the freedom the app gives me. When I want to work I’ll turn the app on and make myself available. When I don’t want to work, I turn it off. I’m in charge of my work schedule and I love it!”

While Hela Job is currently only available in London, Antypas plans to make it available for job seekers in every major UK city by December. And later, to keep pace with the booming gig economy worldwide, the company plans to introduce the world’s first locally-focused, job-filling, job-finding app to international markets. Hela Job’s next target is to compete directly with Uber Works the U.S., where an estimated 57 million workers have joined the gig economy.

The company’s slogan, “Fill a Job, Find a Job with Hela Job”, will likely be translated into multiple languages as service industries in industrialised countries worldwide undergo a fundamental, digital transformation, relying less on full-time employees and more on part-time, local workers looking for jobs in their own neighbourhood.

MEDIA INQUIRIES: To schedule an interview with a Hela Job Manager, please contact Gary Gabriel at the company’s London headquarters at 020 8080 2775 or gary.gabriel@helajob.com. 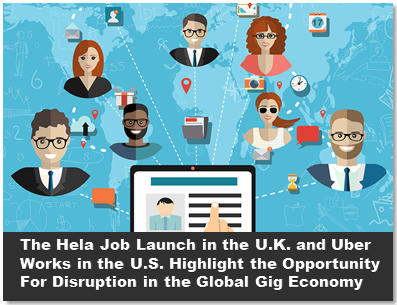 Hela Job is on a mission to reshape the employment market by connecting local companies with local job seekers in an instant with their smart phone. Hela Job is leading the gig economy with a locally-focused, on-demand job hiring app. Our revolutionary platform gives hiring companies instant access to local, part-time workers and job seekers have instant access to local jobs. “Just as entrepreneurs with skills focused on niche markets are the most successful in a gig economy, Hela Job is focused on the needs of local businesses and local job seekers,” said Hela Job Founder and CEO Ioannis Antypas. “While most job apps help companies find workers around the world, we help companies find workers around the corner."