A new survey by The Mummy MOT reveals that 75% of working mothers want to see employers offer flexible hours and an option to work from home.

The Mummy MOT, a unique service which provides a specialist postnatal examination for women following vaginal and caesarean deliveries, surveyed 1000 mums across the UK to find out their health concerns and needs as they transition back to work. Mothers with young children are now more likely to go back to or begin full-time work now that 20 years ago.

Three quarters of women said they want employers to offer flexible hours and an option to work from home - and they’d be more likely to stay loyal to a company that offers attractive benefits. The survey also found that over half of pregnant women and mothers feel they are discriminated against when it comes to climbing the career ladder and pay rises. It’s an uphill battle. Women are taxed for having periods, bear the brunt of contraception side effects and then risk stagnating their career when they have a baby. Statistics show 84% of women become pregnant during their lifetimes meaning women are likely to fall pregnant at pivotal times in their career. On top of the financial implications of procreating, women have a heady mix of psychological and physical issues to deal with too. As well as postnatal depression and anxiety, many women suffer physical issues, including back pain and urinary incontinence. A fifth of mothers surveyed have health issues since having a baby but are not comfortable discussing them with their employer.

Maria Elliott, founder of The Mummy MOT and global leader in pelvic pain and postnatal physiotherapies says: “Most women don’t want to discuss postnatal issues with their employer and even avoid going back to work.” It’s for these reasons that Maria is passionate about women having any issues fixed before they return to work. She adds: “Standing jobs can make a prolapse much worse while pelvic girdle pain is aggravated by sedentary jobs.”

The Mummy MOT has been thrust into the spotlight with high profile women opting to get an MOT to screen for postnatal issues. Stars Gemma Atkinson and Ferne McCann are just two celebrities who have gone public about their positive experience of having a Mummy MOT with Ferne sharing her incontinence ordeal after giving birth to her daughter Sunday.

The fight for flexibility

In July this year, Conservative MP Helen Whately introduced a flexible working bill to help close the gender pay gap, and assist parents in sharing childcare. She argued that unless employers had a sound business reason for having specific working hours, firms should introduce flexibility to every job. She said: “At the moment, too many women are reluctantly dropping out of work or going part-time after having children because their employers won’t allow them flexibility.”

Anna Whitehouse, founder of Flex Appeal, known on social media as Mother Pukka has been campaigning on this issue for five years after her own flexible working request was refused by her employer. The mother-of-two, author and blogger, said she wanted to “open employers’ eyes that there are humans driving their business”, and retaining staff would be far easier if people were better able to balance their work and family lives.

MP Stella Creasy has spoken out in parliament about the difficulties pregnant women face and having to choose to be an MP or mum because of parliament’s rules over maternity leave.

Pregnant The Screwed have launched petition Flex For All, one of their demands is the right for all workers to request flexible working at any stage during their employment.

The UK ranks in the bottom 10 of the worst countries for maternity leave offering just six weeks’ parental leave at 90 percent pay and 33 weeks at a lower rate. Some working mothers surveyed said that maternity leave was “an inconvenience”. Almost half of the women surveyed would like better-paid maternity leave and 35% an on-site creche.

On top of this, British parents pay some of the highest child care rates in the world. A fifth of respondents cited childcare costs as a reason for becoming a stay-at-home mum. One mother said simply: “Those who reproduce are mostly those who cannot afford it.” 44% of women surveyed return to work for financial reasons.

Other issues highlighted in the survey included being forced to travel, toilet access only at break times, no provision for breastfeeding mums, being “penalised” for child sickness and being refused part-time hours.

Marianne (32), from Belfast, works full-time from home as a communications manager. Thankfully, her experience has been largely positive: “My employer is very supportive of my circumstances. Working and juggling home life can be difficult. To know that your company is supportive and respectful of your life outside of work is crucial to finding a balance between work and family life.”

Highlights from the survey results.

30% of women fell into the 35-44 age bracket, while over half the women work full-time.

28% of women don’t feel supported by their employer if they plan to extend their family.

75% of women would like to see employers offer flexible and/or compressed hours and an option to work from home.

42% of women do not feel their emotional and physical needs are being met by their employer since becoming a mother.

20% of working mothers say they have health issues since having a baby but are not comfortable discussing them with their employer.

16% of mothers say that postnatal health issues affect their performance at work.

40% of working mothers say their job has become more stressful since returning from maternity leave.

39% of women surveyed said that given the choice, they would prefer to be a working-from-home mum.

35% of women surveyed said their career has taken a new direction since becoming a mother.

Founder of The Mummy MOT Maria Elliott is available for comment.

1000 women across the UK responded to the survey.

The survey was conducted by 3GEM Research & Insights in 2019. 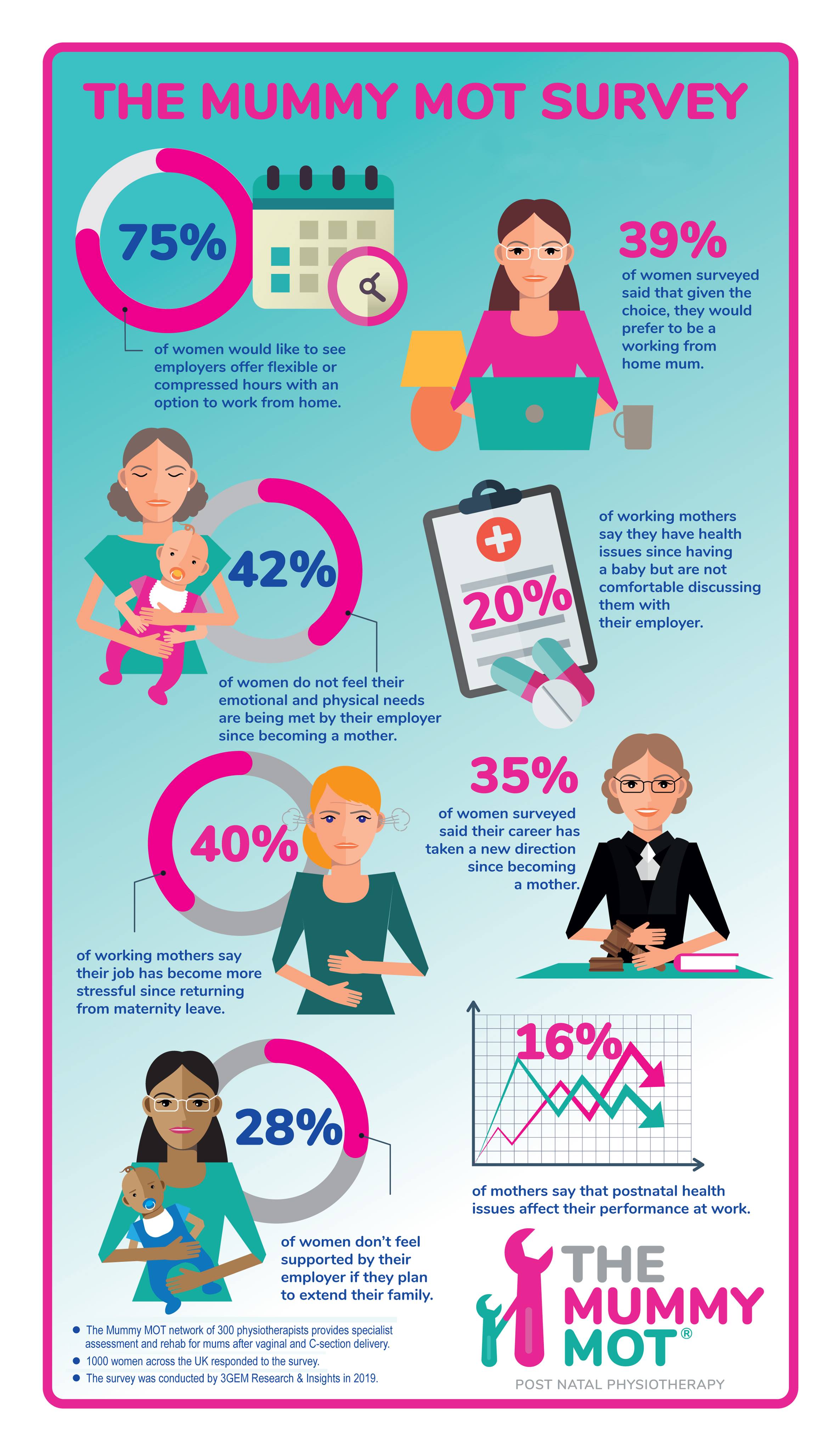